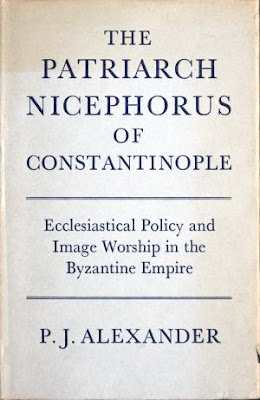 The Patriarch Nicephorus of Constantinople
Ecclesiastical Policy and Image Worship in the Byzantine Empire
By Paul J. Alexander,
Oxford, Clarendon Press, 1958. 287 pp.
Reviewed by Georges Florovsky,
Harvard Divinity School
Church History,
Volume 28, Issue 2
June 1959, pp. 205-206
This book was conceived as an essay in the history of the Iconoclastic Controversy. The aim of the author was to define the role played by Nicephorus in the struggle and his contribution to the theology of Icons. The main merit of the book is in the use of the unpublished work of Nicephorus, Refutatio et Eversio, which, as Professor Alexander rightly observes, is a kind of summa of the whole controversy. In the Appendix to the book a summary of this treatise is given, with a few passages in translation (242-262). It is gratifying to learn that a critical edition of the original text is in preparation (X). The present book is better documented than another recent study on the same subject by Dr. A.J. Viser, Nikephoros und ber Bilderstreit, 1952.
But there is no real advance in the interpretation of the documentary evidence. Professor Alexander's analyses of Nicephorus' own "theory of religious images" (ch. VII, 189-213) is sorely inadequate. The "scholastic element" in Nicephorus' argumentation and its close dependence on the Aristotelian categories are well presented. Yet the reader cannot get from this discussion any clear idea of Nicephorus' conception of the Holy Icons. A detailed comparison of Nicephorus' ideas with those of St. Theodore of Studium would have been more helpful at this point. Not enough is said about St. Theodore in the book and this omission unduly narrows the perspective.
Professor Alexander does not claim originality for the first chapters of his book, dealing with the problem of Religious Images in the Ancient Church (1-53). His use of sources, and also of the scholarly literature, is rather one-sided. Unfortunately, he relies too much on Harnack's interpretation, especially in his well known essay, "Der Geist der morganlandischen Kirche" (1913). This essay of Harnack is notorious for its bias and for that reason it does not deserve that confidence which Professor Alexander bestows upon it. Actually, in this article Harnack only spells out his basic contention, expressed already in Das Wesen des Christentums, that the Eastern Church was not Christian at all (cf. Erst Benz, Die Ostkirche im Lichte der Protestantischen Geschichtsschreibung von der Reformation bis zur Gegenwart, Munchen 1952, s. 230-256; Harnack's article first appeared in the Berlin Sitzungsberichte for 1913, was then included in the volume of his collected essays, Aus der Friedens - und Kriegsarbeit, 1916, and was recently reprinted in his Ausgewahlte Reden und Aufsatze, Walter de Gruyter & Co., Berlin, 1951, s. 80-112.)
On the other hand, Professor Alexander did not use sufficiently the relevant theological literature, which could have suggested to him some other avenues of interpretation. His treatment of the basic concept of "image" is inadequate (p. 253 f.). The "icon" is basically and by design, a portrait, i.e. a presentation of a real person. Now, a portrait is neither a "symbol," nor an "essential image." Both St. Theodore and Nicephorus endeavored to elaborate the concept of an "image," which would express this specific character of the icon. Professor Alexander could have profited much from the instructive analyses of the problem by Professor von Campenhausen, "Die Bilderfrage als theologisches Problem der Alten Kirche," in Zeitschrift fur Theologie und Kirche, 49.I, 1952, s. 33-60, and even from the earlier study by E. Benz, "Christliche Mystik und Christliche Kunst," in Deutsche Vierteljahrsschrift fur Literaturwissenschaft und Geistesgeschichte, XII.I, 1934, s. 22-48. Neither is included in the Bibliography, nor are the admirable articles by Lucas Koch, in Benediktinische Monatsschrift. On the whole his "Bibliography" is incomplete: especially Russian literature is very inadequately mentioned - even Ostrogorsky's Russian articles in the Seminarium Kondakovianum are not included; the works of Grossu and Dobroklonsky's St. Theodore of Studium are omitted, as well as Bolotov's Lectures on the History of the Ancient Church, where, in the IVth volume, a penetrating analysis of the Iconoclastic Controversy is given. The main weakness of Alexander's study is precisely in the lack of theological apprehension. There is much of valuable information in the book, but as an essay in interpretation the book is a failure.