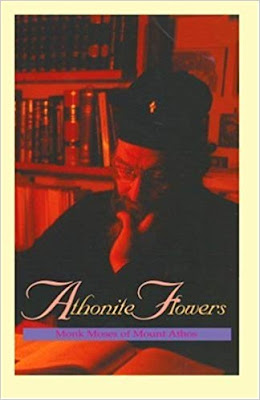 Athonite Flowers: Seven Contemporary Essays on the Spiritual Life
By Monk Moses of Mount Athos
Translated by Fr. Peter A. Chamberas
Holy Cross Greek Orthodox Press
2000, Pp. 100.
Reviewed by Constantine Cavarnos
This beautiful and very edifying book is comprised of seven essays. All of them will serve, as Father Peter Chamberas aptly remarks in his eloquent Foreword, "as a testimony to the ever vibrant and ever rejuvenating spiritual tradition of Mount Athos, a bastion of Christian Orthodoxy." They will serve also as a testimony that their author, the monk Moses, "is not only a contemporary representative of this spiritual tradition, but also an eloquent and dynamic exponent of it throughout Greece."
With the regard to the last point, it is to be noted that Father Moses' lifestyle combines life in monastic seclusion with life in the "world," where he is invited to lecture on the spiritual life to large audiences. In a recent issue (January-March 2001) of the Athonite periodical Protaton, we read that during the year 2000 he spoke in the following cities of Greece: Karditsa, Piraeus, Athens, Serrai, Thessaloniki, and Florina, in that order, between March and December.
The book is composed of the following essays: (1) The Community of the Desert and the Loneliness of the Cities; (2) Jesus Christ: The Life of the World; (3) The Holy Spirit in the Life of the Faithful; (4) Sanctification and Holiness; (5) The Life of Prayer; (6) The Power of Prayer, and (7) Ways out of Loneliness for Young People.
About the special relevance of this book for people of today, Chamberas says in his Foreword: "At a time when modern man seems to have lost his true bearing and is beset by alienation from himself, from others, and from God, the essays of Moses provide a most refreshing drink of cool, clear water from the perennial springs of Orthodoxy."
I shall not attempt to summarize the contents of Athonite Flowers - something impossible in a brief review. Instead, I shall quote from each essay one or two particularly insightful and felicitous statements made by the author.
In the first essay, "The Community of the Desert and the Loneliness of the Cities," Father Moses observes: "Modern art is a good example of the spiritual alienation that we see. Instead of shedding light and opening windows toward others and toward heaven it tends to shut us in and to plunge us, ever deeper, into obscurity and darkness." And he adds: "In his isolation man is plagued relentlessly by egotism and pride which are the natural parents of his loneliness" (p. 2).
In the second essay, "Jesus Christ: The Life of the World," he says: "Christ offers true and real life.... Without Christ life is dark, joyless, despairing." Unfortunately, today "Christ remains unknown even to the Christians. There is an urgent need to re-evangelize the Christians" (p. 21, 16).
The re-evangelizing of Christians, teaching them the Orthodox Christian Faith, is seen in the third essay ("The Holy Spirit in the Life of the Faithful") as taking place now by Orthodox monasticism. Father Moses says: "It is a great blessing to see hesychasm, or sacred quietude, is being recognized as necessary for the renewal of the Church and for its pastoral work in the world. Today, a spiritual love of monasticism is flowering even in our cities" (p. 45).
In his next essay, "Sanctification and Holiness," he says: "Holiness is the purpose of human life" (p. 47). In support of this assertion he quotes Leviticus 20:7 and John 17:17. With regard to the attainment of this supreme destiny of man he says that "the lives of saints are very helpful reading. Being human, bearing the same flesh, and subject to the same passions as we, saints serve as models, examples of those who overcame the flesh and evil of this world, and who attained the award of victory - sanctification" (p. 47).
"The Life of Prayer," - which is the subject of the fifth essay, is said to be "one part of a much broader topic: the spiritual life in general, the life in Christ, spiritual ascension, the way of sanctification and deification." To be fruitful, prayer requires an ascetic way of life. "Prayer is obstructed, by much sleeping, much eating, much talking and luxury" (pp. 60, 67).
In the essay that follows, "The Power of Prayer," Father Moses remarks: "Prayer is God's greatest gift to man. Indeed, it is man's greatest power, which he can use to rediscover and restore the original beauty of his nature.... Its power is such that it brings the grace of God, empowering saints to do miraculous and amazing deeds" (pp. 85, 87).
In the closing chapter, "Ways out of Loneliness for Young People," he remarks that loneliness "cannot be overcome by the prescriptions of psychologists, sociologists, authors and preachers. It requires personal struggle, an inner ordering of the self.... Only the person whose inner life is well-balanced can have healthy relationships with others" (p. 92).
This excellent book abounds in quotations from Holy Scripture, from the writings contained in the Philokalia, the Ladder of Divine Ascent, the Gerontikon, from those of Saints John Chrysostom, John Damascene, Symeon the New Theologian, Gregory Palamas, and Isaac the Syrian, as well as from those of Dostoyevsky and other writers.
The Enlish-language reading public, both Orthodox and heterodox interested in the spiritual life, will greatly profit by reading Athonite Flowers. All will feel deep gratitude to the Monk Moses of the Holy Mountain for having written the illuminating and inspiring texts contained in it, and to Father Peter Chamberas of Concord, New Hampshire for his admirable translation of them.