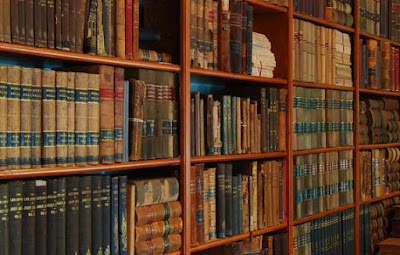 Welcome to the New Myriobiblon! "Myriobiblon" is a Greek word for "myriad of books." The reason it is "new" is because it takes its name from the original Myriobiblon of Saint Photios the Great, more popularly known as the Bibliotheca. One historian calls it “probably the most famous work in medieval Byzantine literature. At least it is unique.” Reynolds and Wilson, in their study Scribes and Scholars: A Guide to the Transmission of Greek and Latin Literature, call the Myriobiblon of Photios "a fascinating production, in which Photios shows himself the inventor of the book review," and say its "280 sections... vary in length from a single sentence to several pages." The works Photios summarizes and reviews are addressed to his brother for his education and entertainment, and are mainly by Christian and pagan authors from the 5th century BC to his own time in the 9th century AD. Almost half the books mentioned no longer survive. He covers works about religion and history, along with some literary pieces, explaining what they were about and sometimes offering excerpts from them.
Photios also sometimes adds his own review of the books, letting his brother know which ones he liked or hated. For example,

Nicomachus of Gerasa’s two books of Arithmetical Theology were read. This certainly is a title suited to astonish and to excite a keen desire, but the treatise – not to call it a work of computations that are based on air and are a waste of time – falls far short of its title.

He had even worse to say about Christian History, which was written by Philip of Side:

His language is diffuse, without urbanity or elegance, and soon palls, or positively disgusts; his aim is rather to display his knowledge than to benefit the reader. Most of the matter has nothing to do with history, and the work might be called a treatise on all kinds of subjects rather than a history, a tasteless effusion.

Photios even finds something to criticize in The Histories of Herodotus, considered to be one of the greatest works of Ancient Greece:

Read the nine books of the History of Herodotus, in name and number identical with the nine Muses. He may be considered the best representative of the Ionic, as Thucydides of the Attic dialect. He is fond of old wives’ tales and digressions, pervaded by charming sentiments, which, however, sometimes obscure the due appreciation of history and its correct and proper character. Truth does not allow her accuracy to be impaired by fables or excessive digressions from the subject.

While he tends to comment on books he did not like, Photios also tells about those works he loves. For example, he praises the writings of Arrian, who is one of the best sources for the campaigns of Alexander the Great:

This author is second to none of the best historical writers. He is very strong in concise narrative, and never impairs the continuity of the story by ill-timed digressions or parentheses; he is novel rather in arrangement than in diction, which he employs in such a manner that it would be impossible for the narrative to be set forth more clearly and perspicuously. His style is distinct, euphonious, and terse, characterized by a combination of smoothness and loftiness. His novelties of language are not merely far-fetched innovations, but are obvious and emphatic, figures of speech in reality, and not simply a change of ordinary words. The result is that not only in this respect is clearness secured, but also in the equipment, order, and nature of the narrative, which is the artistic essence of perspicuity. For straightforward periods are used even by those who are not specialists, and if this is done without anything to relieve them, the style degenerates into flatness and meanness, of which, in spite of his clearness, there are no traces in our author. He makes use of ellipsis, not of periods but of words, so that the ellipsis is not even noticed; any attempt to supply what is omitted would seem to indicate a tendency to unessential additions, and would not really fill up the gap. The variety of his rhetorical figures is admirable; they do not deviate at once altogether from simple form and usage, but are gradually interwoven from the beginning, so that they neither offend by satiety nor create confusion by sudden change. In a word, anyone who compares him with other historians, will find that many classical writers are his inferior in composition.

This New Myriobiblon is likewise a website dedicated to reviewing books, primarily literature that is of special interest to Orthodox Christians, but not only. I will review every book I will read from now on and some I have already read, or at least give a brief evaluation of it. Sometimes I am asked if I read this or that book and people want to know my opinion of it. Here you will read my opinion of it, if I read it. My hope is that these reviews will be found helpful by all who similarly enjoy reading and learning.
This website is part of the ministry of the Mystagogy Resource Center. All inquiries should be sent to mystagogy@aol.com.
With love in Christ,
John Sanidopoulos
Director of the Mystagogy Resource Center