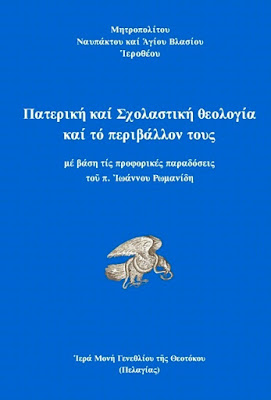 In this work is concentrated the Orthodox theological thought of the Metropolitan of Nafpaktos, which has its origins in the Patristic teachings and is based on it. This Orthodox patristic theology is expressed by His Holiness "in words and deeds" throughout his fruitful, productive and divinely-inspired ecclesiastical course with his teachings, his sermons, his numerous articles, his rich book writing and enlightened pastoral work and his hierarchical tenure.

Hierotheos of Nafpaktos compares Patristic with Scholastic theology and tries to record the differences between the two types of theology in an original way. Based on the oral teachings of the late Father John Romanides as well as his own research of many years, a research based on sources and related literature, he cleanses Orthodox theology from scholastic ideas, reflections and fantasies. In the teachings of Father Romanides is presented, by the hand of His Eminence Mr. Hierotheos, the authenticity of Orthodox patristic theology, the hesychastic tradition of the Church Fathers, which was altered by the Christianity of the West, an alteration he himself knew well growing up in America and coming in contact with all modern theological and philosophical movements. But apart from its theological content, the work also has a historical and philosophical content.

At the beginning of Patristic and Scholastic Theology and Their Environment reference is made to the teaching of Fr. John Romanides, who came to Greece equipped with the knowledge of Western theology, but also the knowledge and experience of Romiosini, creating a special feeling. As the author himself states, "Whoever is attracted by orthodox, ecclesiastical and patristic theology, 'falls' onto the theology of Fr. John Romanides." The chapters that follow refer to Greek philosophy (Plato, Aristotle and the Neoplatonists), which influenced some theologians of the ancient Church, who fell into heresies, which were condemned by the Church. It then refers to Patristic theology, which is a continuation of the Prophetic and Apostolic revelatory theology, as well as its interpretive keys in Triadology, Christology, Ecclesiology, Spirituality and Eschatology.

Interpretive keys are those elements that help in the authentic reading, analysis and interpretation of the thought of the Church Fathers so that it is not misinterpreted. As far as the Trinity is concerned, one interpretive key is that God is a Trinity: Father, Son, and Holy Spirit. One cannot talk about God and, much more, think about God. What we know about Him is from the experience of His uncreated energies, which are comprehensible, and not from His essence, which is unknown to humans and incomprehensible. Another key is that there is no resemblance, no analogy, between the created and the uncreated glory of God. Therefore we cannot, through creation, know the uncreated. The third interpretive key of the Trinity is that "the God-seeing saints know, from their experience, that in the Triune God there are the common and the incommunicable. The common are the essence-nature, energy, glory and kingdom, and the incommunicable are the hypostatic properties, that is, the Father is unbegotten, the Son is begotten and the Holy Spirit proceeds."

The basic interpretive key of Ecclesiology and the spiritual life of Christians is "the unity between the Mysteries and the degrees of perfection as well as its attainment, that is, purification, illumination and deification, that is, the attainment of man to glorification, as is done with all the saints." Finally, regarding Eschatology, "a basic interpretive key of ecclesiastical life is how one will meet God and how one will see Him, either as light or as fire."

The interpretive keys, therefore, according to His Eminence Mr. Hierotheos, "help us to study the ecclesiastical issues, theology and practice of the Church and to distinguish the Orthodox Tradition from the other pagan, heterodox and other religious traditions." He considers as an important interpretive key "attainment, that is, the healing of man, by which he acquires true knowledge of God." Without the help of interpretive keys we cannot understand the Patristic tradition and teaching.

The last chapter of the book talks about Romiosini and Frankdom, which consists of the body of Patristic and Scholastic theology respectively and talks about the Roman Empire, the French and Greek Revolutions, the formation of the Greek State and of Modern Europe.

Of course, we should point out that all the chapters of the book depend on the basic core of the book, which is the difference between Patristic and Scholastic theology.

The reader of Patristic and Scholastic Theology and Their Environment learns that Patristic theology is based on the divine vision of the deified saints and sets as conditions of the knowledge of God purification, illumination and deification. The historical background is the area of the united Christian Empire (Romiosini). Scholastic theology, on the other hand, is based on the philosophical preoccupation with God and the attempt to understanding through reason. It was cultivated in the university faculties and the West is the place of its expression, as it was formed by the Franks (Frankdom).

Patristic theology has as its center the revelation of God in the heart of man, through the illumined nous, while Scholastic theology has as its center contemplation, with the help of the reason and speculation of man. Scholastic theology was based, not on the empirical teaching of the Church Fathers, but on the “tradition of the ancient heretics, using basically ancient Greek philosophy and contemplation, which was the basis of the ancient heretics. Thus, from Scholastic theology, the West passed to the Reformation, the Renaissance, the Enlightenment and the new psychological, existential and social currents that prevail."

His Eminence Mr. Hierotheos with his work Patristic and Scholastic Theology and Their Environment and with the subtitle "Based on the Oral Traditions of Fr. John Romanides", helps the reader to understand that Patristic and Scholastic theology are two different theological traditions. On the one hand it helps him to realize the great contribution of the Church Fathers, the great value of Orthodox theology. On the other hand, it helps him to understand the deviation of Western theology from prophetic, apostolic and patristic theology. It is a book that reveals our identity, our self-awareness and which can cause an inner awakening. With this work, Mr. Hierotheos of Nafpaktos managed to distinguish ours from the foreign ones, Romiosini from Frankdom.
Posted by John at 1:14 PM