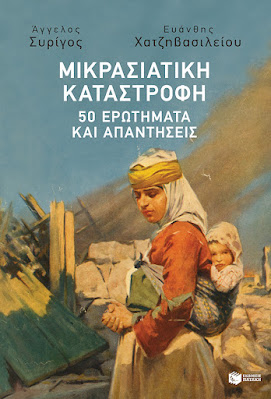 Translated by John Sanidopoulos
We are passing through the hundredth year since the Asia Minor Catastrophe and many events are taking place commemorating those events, with a responsible evaluation, so that it turns out to be a positive event for all of us.

Already last year (2021) we celebrated the anniversary of two hundred years since the beginning of the 1821 revolution, which was full of victories and defeats, tensions and peace, sorrows and joys. However, the Asia Minor Campaign and Catastrophe offers us only sorrows, it is a trauma, not only in our historical memory, but also in our historical body itself.

It is not easy to deal with the loss, not only of the Great Idea, but also of entire areas that were pulsating with life for 3,000-3,500 years. It is indeed a tragedy. And when I participate in events that refer to the Asia Minor Catastrophe, I get very upset.

For a long time I was looking for a book that would develop this topic with scientific seriousness and competence. Of course, there is a large literature on this subject, but I was looking for something concise from a gifted scientific writer, who could write it in a short and clear way, relying, however, on authentic sources. After all, we live in an age where we want to learn a lot in a short period of time, we want to be introduced to the truth of the facts in a short way and in a minimum of time, but with a true word and not a misleading one.

I found what I was looking for in the book by Angelos Syrigos and Evanthi Hatzivasiliou, titled "The Asia Minor Catastrophe: 50 Questions and Answers" (p. 255, published by Pataki).

The authors themselves are expert scientists in these matters, they write in a simple and structured way, having not only a documented scientific process, but "they have ancestors who came from Ionia, Eastern Thrace, Constantinople, Cappadocia, Pontus, Cilicia (or even earlier, from Eastern Roumeli).

These qualities make them knowledgeable about the object they are processing and analyzing, to have scientific proficiency, to harmoniously unite emotion with sobriety, the events of the past with modern reality, realism with self-awareness. Reading this book, one comes into contact with the panorama of the Asia Minor Catastrophe, through cool and sober assessments.

As can be seen from the title of the book, the inductive way of asking questions was chosen by its authors, which makes the analysis of the topic more attractive, avoiding details that make reading difficult, and recording only the dates necessary to follow the topic.

Although the text of his book is divided into fifty questions-answers, one can still distinguish, as can be seen in the list of maps, four general units, namely:

In the Introduction, the authors of his work point out that "this book aims to provide basic information on the causes, evolution and effects of the Asia Minor Campaign and the Asia Minor Catastrophe. In addition, it attempts to answer some of the big questions about these issues - questions that understandably occupy the public debate, and which have from time to time been addressed to the two authors, by different audiences, in different regions of the country."

Then it is stated that this book "was written with joy and devotion to our demanding sober friends," and the difference is noted between 1821 which "is a history of victory and triumph for our nation" and 1922 which "is the greatest disaster that Hellenism suffered in its long history."

After that I think I should quote the main points of the Introduction.

First, that this book was not written "to mourn", but "primarily aims to present an accurate and honest (and, we hope, courageous) discussion of the big questions that arise and, if it is not accurate, honest and courageous, it cannot also be scientific."

Secondly, this book does not examine issues that concern only "us", but also issues that concern "others". It must be understood that "1922 is for us the most traumatic moment in the 3,500 years of Greek history. But 1922 is for the Turks what 1821 is for us: it is the victory (as they themselves put it) with which they conquer independence from the 'enemy'. It is really interesting that the two peoples, Greek and Turkish, have waged wars of independence against each other." And the fact is emphasized that "in 1922 the Turkish nation won a huge victory against a coalition of states" who were, in fact, the winners of the First World War.

Thirdly, that "we must properly manage the memory of this great event," i.e. "we must approach something which for us is a huge trauma, but for the people on the opposite shore of the Aegean a triumph - a triumph, moreover, which was recorded primarily against us" (pp. 19-20). This means that as a society we should not "turn to manifestations of wounded nationalism," remembering this tragic event.

Fourthly, that "this book is also an indirect call to avoid divisions, such as those that are responsible for the catastrophe in many cases." Of course, the pages of the book calmly analyze "the positions of both sides of the Schism with respect for the people who were involved in it at the time," and "at the same time, the book points out and records the enormous effects of the Schism." In this way, the hope is recorded that in "at least some measure it will contribute to the liberation of our society from its traps," that is, the division.

As I mentioned before, I read the book with great interest and attention, and it literally absorbed me with the recording of the events, but also with their cool scientific approach, without offensive expressions and uncritical rejections. I would be able, after reading it, to record some of my observations.

The first observation is connected to the great problem created by the division between King Constantine and the Prime Minister Eleftherios Venizelos, where this division spread among the people, the politicians and the military with terrible consequences for the Nation.

Of course, the views of both sides (Constantine and Venizelos) were based on estimates of who the winners of the First World War would be, so that Greece could take its relevant decisions. It is not a matter of conscious national betrayal, but of assessments that define different tactics in matters of foreign policy, which were, of course, common, but included in different formations of States.

This division prevailed after the war in Turkey as well between the Sultan who came to terms with the development and results of the First World War, and Mustafa Kemal who continued the resistance and finally proved to be the winner. In other words, there was a division in Turkey too, but with different causes and different results.

In Greece, the division resulted in the defeat of Venizelos in the November 1920 elections, the predominance of the anti-Venizelians, the reinstatement of King Constantine despite the opposing position of the Allies who divided their position, since King Constantine was a "red flag especially for the French."

The second observation is that Greece finally joined the Allies who won in World War I, while Turkey was among the losers in this war. Thus, a series of treaties were signed, such as the Treaty of Mudros (October 1918), the Paris Peace Conference (January-May 12, 1919) and the Treaty of Sèvres (July-August 1920).

Within this perspective, Greece landed in Smyrna. However, "the Treaty of Sevres was never ratified" and "essentially, the implementation of the Treaty of Sevres (for the area of Smyrna) had been entrusted exclusively to Greece and to the success or failure of the Greek army."

Besides this, the French and the Italians were interested in their own interests, and they even came to secret agreements with Kemal and, moreover, supplied Kemal with munitions. The British supported Greece somewhat, so that Churchill said "that the signing of the Treaty of Sèvres constituted a continuation of Britain's war with the Ottoman Empire 'through its proxy' which in this case was Greece," ut it also had its own interests.

Thus, the Treaty of Sèvres was signed in August 1920, "however, it was never ratified by the contracting parties. It was partially overturned by the Kemalist victories in Asia Minor, and was replaced by the Treaty of Lausanne in July 1923."

The third observation is that the results of the Asia Minor Campaign were disastrous for Greece, since an entire tradition that went back centuries from Asia Minor, Pontus, Cappadocia and Eastern Thrace was lost.

This had consequences for people, properties, etc. It is not simply about the consequences of a war, but about "genocide", about "ethnic cleansing", about "destruction of the Greek cultural monuments on the opposite bank of the Aegean, the violent cutting off of Hellenism from the ancestral homeland, the chaos of the refugee in Greece, the disintegration of an entire world, for one and a half million Greeks".

Of course, we are talking about the "Asia Minor Catastrophe", but in reality it is a "genocide", because orders were given "from above". Although the term "holocaust" has been established for the death of the Jews, this does not mean that it was not a "genocide" of the Jews during the Second World War. The same is happening in our case. Although it is called the Asia Minor Catastrophe, it was nevertheless a genocide.

This does not mean that it should be ignored that the Greek army in the period 1919-1920 also committed atrocities against the Turks. But this was not done by orders "from above", on the contrary, in fact, the orders given were for the peaceful coexistence of Greeks and Turks. It is one thing to commit war crimes and another to commit genocide and ethnic cleansing.

The fourth observation is that despite the enormous disasters suffered by the Hellenism of Asia Minor, Pontus, Cappadocia, Thrace, nevertheless the then small Greece of four million people who suffered economically and were exhausted, absorbed "a huge stream of refugees", about one and a half million, who, despite the difficulties, were incorporated into the Greek population. And they "settled, progressed and brought progress to the country as well, carrying with them a spirit different from that of the Greeks."

It is noted that this was a "gigantic achievement" and is credited to the positive points of the issue, and as it is written, this "was the greatest achievement of the Greek state in its 200 years of existence." In fact, it is underlined that it was "a greater achievement than the wars it (Greece) won, greater than joining Europe."

I think that with the destruction of Asia Minor the "Great Idea" regarding the increase of the borders of the Greek State was dissolved, but keeping the spiritual and cultural tradition that the "refugee" Romans brought to us, we should cultivate the cultural Great Idea, that is to be occupied with the meaning of life that this culture that governs our Race has and to express it in the modern United Europe.

This book has many messages to offer, it can fertilize many thoughts and inspire our orientation in the tradition of "our East". And of course to show that the mistakes of the past should not be repeated.
Posted by John at 1:13 PM