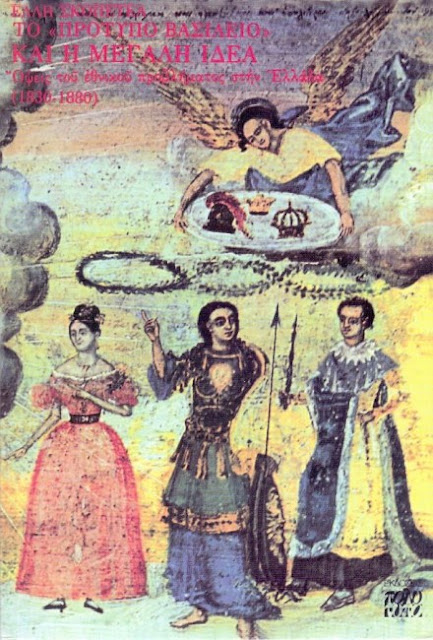 The enumeration of the chapters and the individual sections demonstrates the importance of this book and because the researcher-author used a lot of material from the press of the time, its importance increases even more. When one reads this book carefully, one realizes the whole atmosphere that prevailed in the Greek land from the Revolution of 1821 onward, especially the period from 1830 to 1880.
It is not easy to present the main points with one article and the arguments surrounding the subject of the book. However, because there are two central points of this book, as it appears in its title, namely one "the Model Kingdom" and the other "the Great Idea", so we will suffice with a brief presentation of the views of Elli Skopetea on these issues.

The term "Model Kingdom" was first coined in the proclamation of King George to the Hellenic people in 1863 with the phrase "the model Kingdom in the East", which expressed the entire ideology from the Revolution and later for the creation of a modern European State and he essentially defined the "image of Greece as a chrysalis: a Greece that is no longer Greece, but neither (yet) Europe".

With the creation of Greece as a state entity, three specific goals were pursued. The first to connect the new state structure with ancient Greece, the second to disconnect from the umbilical cord with the Ecumenical Patriarchate and generally from Romania-Byzantium, and the third to orient towards Europe.

In this perspective, a new national consciousness was sought. As the author says, "there was an urgent need for an independent elaboration of a new consciousness, in the new frame of reference which was the nation state". Both scholars and politicians contributed to the generalization of the "transition from the 'supranational' to the national consciousness, thus completing a movement that had begun in pre-revolutionary times. But at the same time, from the very same things, there enter into the movement that which leads from the 'national' to the 'Hellenic' — a movement that is equally unavoidable but mistaken".

Also, in this perspective is included the definition of the borders, since the purpose was to create "a tiny, splinter Kingdom at the southern tip of the Balkan Peninsula; the borders of the Greek state satisfied only a minimum of national claims".

Also, in this perspective are included the conflicts between natives and non-natives, the distinction between Helladites and Hellenes, Ionians and Phanariots.

In the attempt to create a new national consciousness, three cultural quantities were used, namely the language with its orientation to the ancient form, which was certainly an "artificial, a simple 'written' language, but acquired the behavior of a living language"; the religion with the exclusion of the Church of Greece by the Ecumenical Patriarchate, "from the arbitrary proclamation of the autocephaly to the compliance of the traditional boundaries of the dioceses with the boundaries of the prefectures"; and education, since "in the educational reality of the Kingdom both the 'national' and the 'European' are represented parts of education, but also, one might say, outdated”.

In the effort to create a new national consciousness, the studies around ancient Greece were intensively cultivated, excavations were made for the discovery of ancient monuments, and ancient Greek Associations were created to promote these ideas.

The second central point of the book refers to the Great Idea of the Race. And at this point many testimonies are submitted, taken from the daily and periodical press of the time.

The "birth certificate" of the term "Great Idea" came from the speech of Ioannis Kolettis on 1/14/1844 "during the debate in the National Assembly on the issue of foreigners". "Kolettis went down in history either as a leader who served the Great Idea or, on the contrary, as its demagogue." Of course, Kolettis, who served as Minister of Foreign Affairs, Interior, Education, Prime Minister, President of the Archaeological Society and leader of the French party, "did not hurry, taking authority to clarify in practice what exactly he meant by preaching the Great Idea." On the other hand, the Europeans, who had defined the borders of the Greek State and the purpose of its existence, questioned the Greek "dream", which they considered "a joke", but also "annoying".

Eventually, the Great Idea went through three successive phases. As the author analyzes in detail: “In the first phase, Constantinople is still viewed as a national center, and the dominant vision is the Eastern or Hellenic Empire. In the second, which is formalized by the arrival of George and the first increase of the Kingdom with the Union of the Ionian Islands, the national center is now Athens, and the pursuit of the expansion of the Greek borders. In the third, which comes with the realization, around 1870, of the change of the position of the Greek community in the Ottoman Empire, an attempt is made to reconcile the two centers, behind the form of Helleno-Ottomanism".

The book we present analyzes many interesting issues, which must be borne in mind by every scholar, every Clergyman, every interested citizen of Greece, but even those who deal with the politics and even the foreign policy of the country. For example, the purpose of the creation of Athens as the capital of the Greek State is presented, the relationship and the difference between Constantinople and Athens, how the Greeks saw the expatriates, how “the ancients returned to the Greek lands, how the Greeks finally became Hellenes" and in this perspective "an eminent symbol of rebirth was the Phoenix, reborn from its ashes", that "the establishment of the State and especially the transfer of the capital to Athens was the starting point not only of spectacular archaeological discoveries, but an unprecedented mass destruction of monuments — either by individuals or government officials — that had remained intact for centuries.”

In general, throughout the book it seems that with the Revolution of 1821 the Great Powers sought to create a State oriented to Europe, a Europe which had accepted the influence of the ancient Greeks with the Renaissance and Neoclassicism, but at the same time within the created State there was identified the perception of Hellenism with Greecism, that is, Hellenism shrank into a province, that is why the Great Idea was cultivated. Thus, the "Model Kingdom" was oriented towards Hellenism, and the "Great Idea" is a reference to Hellenism with its ecumenical dimension. That is why Spyridon Trikoupis preserved the double characterization of the struggle of 1821 as "revolution and apostasy". And the confusion "of the established nation with the established state intensifies the dominant ambiguity", so that "for Makriyannis the nation remains something that is sought after the Greeks failed to achieve it", while for G. Philemon the Greek State is opposed "to the abstract" and according to G. Filaretos the Greek State will be called "straight out" the "Kingdom of Athens and Piraeus".

The book The 'Model Kingdom' and the Great Idea is very important and when one reads it carefully, one can interpret not only historical events that preceded, but also the modern mentality that prevails in Greece. It shows the great alteration that took place in our Nation and its disorientation. Books like this, written with seriousness and scientific conscientiousness, without fanaticism and microscopic perceptions, are an offering not only to science but also to the consciousness of our own individuality.

This short presentation is also considered as a memorial to the author of the book who recently reposed, at a relatively young age and at the height of her scientific maturity.
Posted by John at 5:04 PM