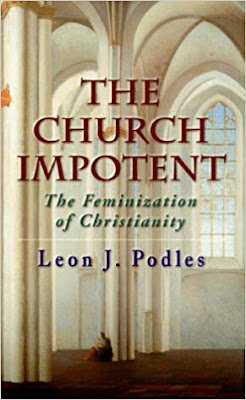 The Church Impotent:
The Feminization of Christianity
By Leon J. Podles
Reviewed by Fr. Geoffrey Korz
In the age of political correctness, one has become accustomed to reading about gender issues, at all levels. From campaigns to increase the number of women in legislatures, to special science programs for girls, to treatises condemning the dominance of patriarchy in religion, revolutionary feminism has succeeded in capturing the North American mind. In the process, it has also captured the North American political, social, and religious reality, and affected major changes in the landscape in which we live.
Part of the success of radical feminism has been their reliance on the myth that men - aggressive, stupid, and backward-looking men - continue to dominate positions of power, shaping the mindset of the poor souls who suffer under their brutish care.
Enter author Leon Podles. Podles could be described as the "myth-buster" of North American religious life. Far from painting a picture favourable to the existence of a male religious "establishment", Podles builds a convincing argument in support of a very different trend: the feminization of what sociologists call "Christianity" in North America. Starting with basic demographics, Podles underscores the decline of men in organized Christians groups across North America. In his chapter, Armies of Women, Podles offers a glimpse into the range of impact of this shift, from the most extreme among Pentacostal groups (almost 2:1 women to male), to the most moderate (slightly more than 1:1 women to male) among Roman Catholics. The shift in the number of seminarians show similar trends.
The patristic dictum, lex orandi, lex credendi, (the law of worship equals the law of belief) is reflected throughout this book, with an almost eerie consistency. In his chapter on Feminized Christianity, Podles examines the impact of the demographic makeup of Christian groups. He argues that the shift is fundamentally theological, a rejection of the inheritance of the traditional Judaeo-Christian understanding of God, replaced by a new (or at least different), highly romanticized and feelings-based approach to what is commonly seen as "Christian" life in North America. From the frills on the robes of androgenos high-church Episcopalians, to the warm-and-fuzzy Bible study, to the advent of Precious Moments dolls as a bizarre religious icon, Podles suggests that the contemporary mind views Christianity in a whole new light: it is a religion for girls, and men who act like girls.
Curiously sparse are references to the historic Orthodox Church, either in antiquity or in contemporary times. In the few references Podles offers, he seems somewhat amazed that Orthodoxy does not conform to his thesis. Demographically, men outnumber women in Orthodox church life. The theological fluffiness that afflicts much of Protestantism and Roman Catholicism seems wholly absent from Orthodox circles. Even Podles's remedy for the feminized Christianity of the modern West - inter-generational male bonding rites - seems alien to the Orthodox life, where the normal rigor of prayer and liturgical life (where it is observed), fulfils the emotional social and - dare one say it - spiritual needs of the faithful in a way in which feminized "Christianity" can never do.
The Church Impotent is a fascinating read for anyone interested in major trends within Christian groups in North America. The book reaches far deeper than most sociological analyses (the author is both an academic and a believer), looking behind various ideological trends to their social roots, and tracing the trajectory to its logical conclusion. For Orthodox Christians, The Church Impotent is a reminder of the reasons the Church Fathers took seriously the avoidance of passing fads and theological cream-puffery. Podles's book serves as a call to all faithful to return to the bedrock of the historic Christian Church, as the only means of avoiding the contempt of society at large, and men in particular.
Source