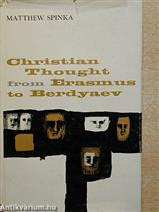 Christian Thought from Erasmus to Berdyaev
By Matthew Spinka,
Englewood Cliffs, N. J., Prentice-Hall, 1962. 246 pp.
Reviewed by Georges Florovsky,
Harvard Divinity School
Church History,
Volume 31, Issue 4
December 1962 , pp. 470-471
In the preface to his new book Dr. Spinka acknowledges his debt to Nicholas Berdyaev. Berdyaev has helped him to find the way between liberalism and Karl Barth. The pattern of interpretation is derived from Berdyaev. "The Era is dying: let it die!" The Era of Humanism has come to its end. The new synthesis is not yet available. We are in the stage of crisis, of critical transition, of desperate search. It is in this perspective that Dr. Spinka narrates the story of Christian thought in modern times - up to Berdyaev! His selection of topics or of sign-posts in this adventure is fair and judicious. His exposition of individual systems is competent and reliable. One can but welcome the inclusion of Russian thinkers in the general survey of the history of Christian thought.
It remains to prove, however, that Solovev, Dostoyevsky, and Berdyaev are really representative of "Eastern Orthodox thinking." Indeed, the case of Dostoyevsky is very complex. Yet, on the whole, even Dostoyevsky stands in the Western tradition and his thought was guided by the problems of Western thought, as they were reflected in the life and endeavor of his Russian contemporaries. The thought of Vladimir Solovev is an episode in the history of German idealism and can be fully understood only in the context of what is usually denoted as Spatidealismus, a rather neglected phase of the idealistic religious philosophy which was quite vigorous in the sixties and seventies of the last century. Attention was called to this forgotten phase by Kurt Leese in his numerous writings. Various motives of Romanticism, Baader, Jacob Boehme, Feuerbach, and of late Schelling were melted together. Berdyaev himself always insisted on his close dependence upon Western tradition. There was little "Eastern" in the thought of those Russian writers which are included by Dr. Spinka in his survey, as much original and stimulating there was in their creative contributions. It is for that reason that these Russian thinkers were so readily accepted in the West. They were speaking the idiom of the West. The selection of Solovev in the book of Dr. Spinka is incomplete: the great book on "The Justification of Good" is not mentioned, but it is probably the most important of all the books of Solovev.
The book has been available, for a long time, in an excellent English translation by Mrs. Nathaly Duddington. One may raise certain objections concerning the selection of topics in the book of Dr. Spinka. It is hardly correct to speak of Bishop Berkeley in the chapter on "Lockean Empiricism." In fact, Berkeley does not belong to the history of English Empiricism - he stood in the tradition of Christian Platonism. One can but regret that Malebranche is not mentioned at all in the book: his system was a noble effort to build a system of "Christian philosophy" on the double basis of Cartesianism and Augustinian Platonism. Of course, any choice of topics for a general survey is inevitably selective, and Dr. Spinka had full right to make his own choice. Yet, his book loses some of its convincing power because it leads the reader simply "to Berdyaev." It is to regret that the chapter on Barth, prepared by the author, was finally omitted: the perspective in the book is sorely narrowed. Again, if the purpose of the writer was to emphasize the crisis of humanism and "the end of an era," it was advisable to introduce the whole problem of recent Existentialism, especially in its atheistic version, in which humanism becomes suicidal and "freedom" becomes the source of ultimate despair.
The major objection against the book of Dr. Spinka is, however, that he does not sufficiently focus the attention of the reader on basic problems of modern Christian thought: what is the relation between the "eternal truth" of Christian revelation and the "historical events"? This seems to be the crucial problem in the contemporary theological search. All these remarks should not obscure the value of Dr. Spinka's book. Born out of his teaching experience, it will help its readers get the first orientation in the perplexed story of Christian thought - from Erasmus to our own times.
Posted by John at 3:21 PM