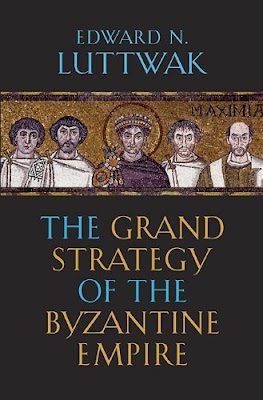 It's not that simple, of course, and Edward Luttwak's The Grand Strategy of the Byzantine Empire is a useful corrective. First, there's the rather obvious point that the East Roman Empire could not have lasted a thousand years unless it had had some valiant defenders. It is true that the Byzantines employed mercenaries, and sometimes had occasion to regret it, but they also waged war with their own men, both professionals and part-time farmer-soldiers, and they preserved a higher level of social organization, for good or ill, when Western Europe was largely made up of feudal domains, with little city life.

The Byzantines did not remain feeble and decadent for all the centuries that their empire endured, although they certainly had their reverses, and their wicked or incompetent emperors. There were times, notable in the ninth and tenth centuries, when they succeeded in regaining territory, and in giving their Arab and Balkan foes good reason to fear their discipline and determination.

Their soldiers were well-trained in the use of weapons, and generally in various weapons and tools, so that they could charge with their lances, ply the foe with arrows from a distance, or assist in the engineering work of besieging an enemy fortress. They were further trained and drilled in carrying out military operations as an organized group, able to perform various complicated operations according to circumstances and the orders of their officers. This gave a regiment of Byzantine cataphracts an important advantage over a troop of Frankish knights who only knew how to conduct a furious, if sometimes disorganized, charge.

The Byzantines had tactical manuals and a long military tradition. They generally did not risk the loss of large armies if they could help it, but preferred to outmaneuver their foes, to conduct limited fighting, and to offer gold nomismata, together with religious propaganda and titles of noble esteem, to the neighbors of their enemies. Their armies were strong on scouting, spying, skirmishing, logistics, and camp organization.

This is not the most gloriously impressive way of waging war, but it largely worked. There was no Byzantine Alexander the Great or Napoleon, conquering a vast domain in surprisingly little time, but on the other hand, disasters like Manzikert were rare.

The Byzantines understood, or at least Luttwak credits them with understanding, that it isn't generally a good idea to wipe out your foe at the cost of getting half your own men killed. There would always be another tribe beyond the one you wiped out, another king or emir ready to move into the power vacuum you created. Therefore, the Byzantines generally did not fight wars of attrition to the last drop of blood. They sought to defeat the enemy, and if they could not turn their enemies into good East Roman taxpayers at an acceptable cost in blood, then they would let them remain as a bulwark and potential ally against the wild men across the next river.

One notable point is that the East Romans had no reasonable alternative to paying tribute to Attila's Huns. The Huns had superior composite bows, and men trained to use them from horseback. The Romans did not, and the troops they had were not effective against mounted nomads. Huns with strings of remounts could slaughter the soldiery of settled lands from a distance with their bows, and then either finish the job with lance and swords, or outrun any pursuit.

We would do well to remember that all the Byzantines' cleverness, sophistication, and gold would still not have preserved their empire for long if they had not also had courageous fighting men, as they did. Byzantine soldiers were not normally berserkers, not possessed of the "French fury" of Western European knights, and not mujahideen "who love death more than you love life." Nonetheless, many thousands of them, Emperors and generals and rankers whose names are lost to history, charged the foe or stood their ground, for the defense of their homes, for loyalty to their sovereign and state, for the defense of Orthodox Christendom.

If it had not been for their valor, as well as for the strategic wisdom of the generals and logothetes, the ancient manuscripts that the East Romans preserved might have been lost to the world, and Western Christendom would have faced an Islamic or nomad threat from the southeast, as well as from the south, and sometimes the east, centuries before it actually did.

So let us give due honor to Byzantium's fighting men, and appreciation to Mr. Luttwak's scholarship.