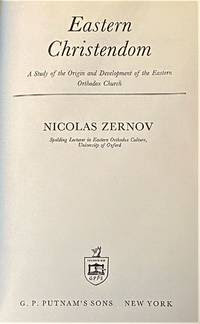 He writes in an easy, rather journalistic style. He usually remains on the surface of the historical process and does not dig deep, even in those cases when it would have increased the effectiveness of his exposition. Bald facts may be dull for the general reader unless their meaning and significance are clearly brought out and emphasized. Dr. Zernov fails to do this consistently. For instance, he speaks of the apostolic ministry of Saints Cyril and Methodius among the Slavs, but he does not elaborate on the far-reaching historic impact of this "conversion of the Slavs" in the general perspective of cultural history. Of course, he says a few words on the Serbian art of the Middle Ages, but he has simply nothing to say on the enormous literary production of the South Slavs, or of Old Russia, in the medieval period. These things should have been pointed out to the Western reader. In the bibliography Dr. Zernov does not mention Father Dvornik's The Slavs, Their Early History and Civilization (Boston, 1956), the book which should first of all have been brought to the attention of the nonspecialized reader. For another example, Dr. Zernov speaks of the ecclesiastical reform of Peter the Great and stresses its unprecedented novelty in the Orthodox Church, but he fails to inform the reader that it was in fact a reshaping of the administrative structure of the Russian Church on the Protestant pattern or model. This is a serious omission, since many influential writers, like Arnold Toynbee, still describe Peter's regulation as an example of Byzantine tradition.

There is a  lack of proportion in the treatment of various episodes. On Protopope Avvakum Dr. Zernov has more to say than on the conversion of the Slavs. Almost nothing is said on the development of theological schools and learning in Russia in the last two centuries, although the author has much to say about Russian religious philosophers. It is a shame that a misprint of "M. M. Kareev (instead of Tareev) occurred on page 205 (and also escaped the attention of the indexer). The trouble is that a Kareev, too, existed - a widely known historian of semi-Positivist persuasion and a prolific writer.

The worst part of the book is that dealing with the faith and doctrine of the Orthodox Church. Actually there is no exposition of this faith and doctrine, even in general outline. It is simply suggested that the difference between the Christian East and the West is only in the realm of theological opinion. The reader will be seriously confused. What is even worse, Dr. Zernov is unforgivably negligent at this point. On page 231 he gives a "quotation" from the famous Encyclical of the Eastern Patriarchs, in 1848, on the seat of authority in the Orthodox Church. The footnote sends the reader to John Birkbeck's book (by the way, the author is cited as "N. Birkbeck"), Russia and the English Church, page 94. In fact, it is a reference to Khomiakov's letter to William Palmer, in which Khomiakov paraphrases a  passage from the Patriarchal Encyclical. And this paraphrase was inaccurate, as was shown by Bernhard Schultze some years ago;  see his article, "A.  S.  Chomiakow und  das Halb-Jahrtausend-Jubilaeum des Einigungskonzils von Florenz," in Orientalia Christiana Periodica, Volume IV, 1938, in which, on page 477, Dr. Zernov could have found the accurate quotation from the Encyclical (with Russian translation). The phrase he quotes is not in the document at all. The reader of Zernov's book will be grossly misled into the erroneous assumption that the Eastern Patriarchs solemnly denied that the hierarchy was the guardian of faith. They never said this. They merely stated that the hierarchy alone was not authorized to introduce new doctrines, alien to common tradition. It is disappointing that Dr. Zernov did not try to read such an important document in its original text. This  is not the only case of hasty and superficial use of material at second hand, a practice which must make even a slightly informed reader of Zernov's book rather uneasy.

The chapter on sacred art in the Christian East is utterly subjective. Unfortunately, nothing is said on Church music and on its lamentable distortion in the Russian Church by Western influences - a theme much discussed and debated in our own days.

To  sum up, the present book by Dr. Zernov must be read with great caution. One may but hope that it will soon be replaced by another book on the same subject written by a competent scholar.
Posted by John at 2:19 PM