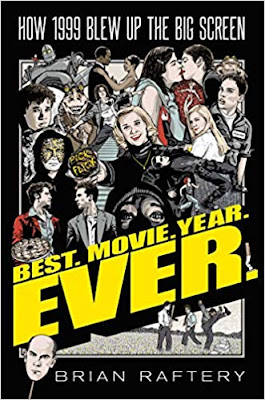 Best. Movie. Year. Ever.: How 1999 Blew Up the Big Screen
By Brian Raftery
Reviewed by John Sanidopoulos
When it comes to movies, 1999 was a pivotal year for me. I suddenly found myself going to the movies not only every weekend, but often more than once a week. Before 1999, I would only go to the movies either to watch something I was really interested in, or because I had nothing else to do, and movies were always an enjoyable alternative. Though my interest in film greatly grew towards the end of 1998, 1999 cemented my growing interest. At the time I thought I merely had a sudden awakening to a reality I never understood before, in addition to the fact that I had just recently graduated college, became married and moved to a new and less exciting city. But over time I realized that there was something special about movies and the year 1999. I had not fully understood it until I recently picked up the book Best. Movie. Year. Ever.: How 1999 Blew Up the Big Screen by Brian Raftery.
First of all, this is a very enjoyable and readable book, but extremely well researched at the same time. The author clearly has a passion for the subject. Here he makes a strong case that there was never a cinematic year like 1999 before, nor after, and perhaps there may never be again. Having seen all but a few of the movies mentioned in this book, as well as many not discussed, I agree with his assessment, though other years do come close, and some often have better films. But this book does not make the case that 1999 had the best movies ever. No. He makes the case that it was the best movie year ever, and there is a big difference.
Just think about some of the movies that came out in 1999, that ushered in the 21st century: Fight Club. The Matrix. Office Space. Election. The Blair Witch Project. The Sixth Sense. Being John Malkovich. Star Wars: The Phantom Menace. American Beauty. American Pie. The Virgin Suicides. Boys Don’t Cry. The Best Man. Three Kings. Magnolia. Cruel Intentions. Rushmore. The Iron Giant. The Mummy. Eyes Wide Shut. These deeply influential films changed movie making forever and are still talked about today. Some may be liked more than others, but no one can deny their influence and impact.
Best. Movie. Year. Ever. is the story of not just how these movies were made, but how they made our own vision of the world. It features more than 130 new and exclusive interviews with such directors and actors as Reese Witherspoon, Edward Norton, Steven Soderbergh, Sofia Coppola, David Fincher, Nia Long, Matthew Broderick, Taye Diggs, M. Night Shyamalan, David O. Russell, James Van Der Beek, Kirsten Dunst, the Blair Witch kids, the Office Space dudes, the guy who played Jar-Jar Binks, and dozens more. For me it was an informative, fun and nostalgic read, inspiring me to go back and rewatch all these films that were preparing us for Y2K. I highly recommend it for people interested in film and culture, especially at the turn of the century, and for those who are interested in how we got to where we are today.