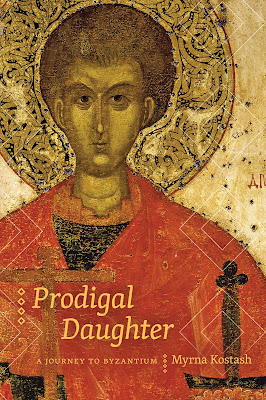 Prodigal Daughter: A Journey to Byzantium
By Myrna Kostash
Review by Cheryl Purdey
January 9, 2011
Edmonton Journal
With the simple but provocative declaration, "I'm Greek," Myrna Kostash embarks on a unique journey. It was something she said as a Grade 4 student growing up in Edmonton when she was ashamed and confused about her Ukrainian background.

As an adult, she is still fascinated with the Greek or Byzantine origins of her heritage, and her curiosity motivates this book. Part spiritual quest, part scholarly inquiry, part travel memoir, Prodigal Daughter is as richly layered as the civilization she explores. A self-described secular humanist, Kostash nevertheless has a deep interest in the Orthodox Church, and the result is an intellectually vigorous study.

Her journey, both geographic and spiritual, is complicated: she crisscrosses the Balkans, that polyglot of nations, nation-states, ethnicities and religions all stirred up during the post-Communist political upheavals of the past two decades. The connecting thread throughout her travels is St. Demetrius, a fourth-century Christian martyr of Thessalonica, Greece. Discovering his icon in a book during a visit to a Benedictine monastery in Saskatchewan, Kostash adopts him as "my Demetrius."

During numerous visits to the Balkans and the eastern Mediterranean, she chases down any lead where he is venerated or honoured. She visits monasteries and museums, churches and cafes, talking with priests, monks, scholars, students and personal friends.

Was Demetrius a saint for the Slavs (Kostash's background) or the Greeks? She soon learns that Demetrius represents many things to many peoples and cultures. He was speared through the heart for spreading the Gospel, and his cult has spread far and wide throughout eastern Europe.

In Macedonia, no church is without its image of the saint. He protected the people of Thessalonica for more than 1,600 years against the barbarians or Slavs. Sometimes he is depicted on a red horse, in full regalia as a Roman soldier, sometimes paired with St. George.

This book, however, is more than a search for Demetrius. It's a closer look, both scholarly and personal, into Byzantium, which, for a thousand years after the fall of Rome in the fifth century, was civilization itself. From its centre in Constantinople, the Byzantine culture radiated wealth, power and splendour around the eastern Mediterranean. And yet this world is dismissed as "an inferior culture at the borderland of the normal" by western scholarship.

As she travels, Kostash sees what war and political unrest have done to the region. In Bulgaria, for instance, drug addiction is a growing scourge and illiteracy is on the rise, due to lack of teachers and schools. "Bulgarians illiterate? The very people to whom the Cyrillic alphabet had been gifted, and from them to my Ukrainian ancestors? Even I feel humiliated." In Serbia, she witnesses grinding poverty and high unemployment as the number of refugees soars and the best and brightest leave the nation in droves. A Byzantine expert in Sofia, Bulgaria, echoes the view of most people in the Balkans with the observation that the "terrible" wars in the former Yugoslavia resulted in the "nationalist genii let out of the bottle to create nation-states in an orgy of bloodletting."

In coffee shops and libraries and tiny kitchens in remote monasteries, Kostash learns more about her own religious and ethnic history. The Orthodox Church, she observes, is the "mother country" for the Slavs. As a monk in Bulgaria tells her: "We are not separate nations in the Church, we are Orthodox together."

Demetrius remains elusive. One priest chides her not to be too obsessed with one saint; a professor in Thessalonica tells her he believes that there was someone named Demetrius, but his personality was probably the stuff of legend. Others see Demetrius as an ecumenical saint. So her search continues, right back to her childhood church in Alberta, St. John's Ukrainian Greek Orthodox Church. The journey itself, like many quests that writers undertake for self-examination and reflection, is more important than reaching conclusions. As Kostash observes during her participation in the holy week of St. Demetrius in Thessalonica: "I was surrounded by his images, but Demetrius himself, I felt, was elsewhere."

The award-winning Kostash, whose All of Baba's Children examined the Ukrainian-Canadian roots of a Prairie community, weaves all of her themes of religion, Byzantine and Slavic history and the diversity of the Balkans into an engrossing and richly informative story. Anyone interested in any or all of these themes will enjoy Prodigal Daughter.