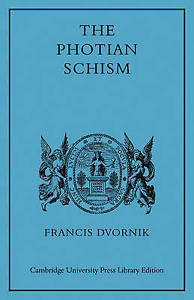 By Bishop John (Christodoulou) Kalogeraki of Amoriou
The work titled The Photian Schism of Fr. Francis Dvornik was welcomed with great enthusiasm by Byzantinists, because Photios had, by the judgments and opinions of fanatic heterodox theologians and historians, been erroneously discarded. Historians beforehand portrayed the Patriarch Photios as the cause of the schism of the Church between West and East. Thanks to this treatise, which was published in 1948, the outstanding personality and enormous worth of the great and wise Patriarch of the Orthodox Church was recognized.
That which characterizes the aforesaid work is the thorough knowledge and exhaustive examination of the sources and bibliography, as well as its methodological interpretation and the clarity of explaining its subject. It contains an index of abbreviations, anecdotes, manuscripts used by the author, three appendixes, a rich catalogue of manuscripts, an excellent bibliography, and at the end an index of names and subjects.
Having said this there are a few issues of secondary importance for which I have reservations and have another opinion on. I especially wanted to highlight the following:
1. The title of the work The Photian Schism is unfortunate and inaccurate, because the title gives the impression that in reality Patriarch Photios was the "Father of the Schism". It should be emphasized that contemporary scholarship has proven that Patriarch Photios was not the cause or motivator behind the schism of the Church. Rather Patriarch Photios is considered the Apostle of Unity for the Church. It would have been preferable for the book to have been titled either The Patriarch Photios or The Schism Between the Western and Eastern Churches.
2. The author observes that the trial of the Patriarch of Constantinople by the delegates of the Papal See of Rome proves by example the recognition of the Primacy of Authority of the Pope of Rome and the right of the Pope of Rome to judge an Ecumenical Patriarch.
3. On page 122 Fr. Dvornik writes that Patriarch Photios should not have brought up the issue of the Filioque against the Synod of 867 since the Pope of Rome found in 862 Photios' Confession that the Holy Spirit proceeds from the Father alone as Orthodox.
The above reservations or misgivings however are not meant to erase the fair spirit of the author, which is revealed throughout the entirety of the book. This should be much more honored when we consider that the same subjects, relating to the schism of the Western and Eastern Church, were often considered a slippery slope for Roman Catholic authors.
The honorable work of Fr. Dvornik is memorialized for this amazing wake-up call. I am empowered to say that it is the basis for anything regarding the study of Photios and the schism, because the sources which were used by Fr. Dvornik must be known. This work, The Photian Schism, is the result of many laborious years of work.
In conclusion, the present work of Fr. Dvornik is a work of toil and enthusiasm for which the author is worthy of praise by all.
From the book titled Analysis and Critique of the Work "The Photian Schism" Authored by Professor Francis Dvornik by Bishop John (Christodoulou) Kalogeraki of Amoriou.
Translated by John Sanidopoulos