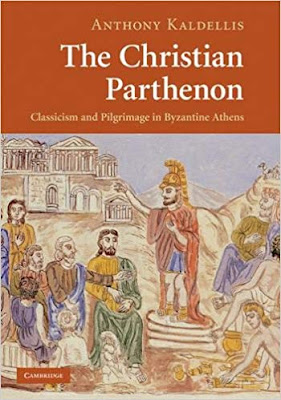 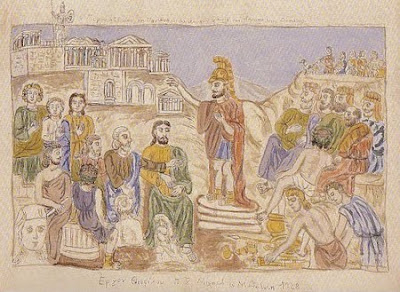 For the following few centuries Kaldellis painstakingly analyses a number of obscure and secondary sources (e.g. vitae of saints) in order to argue that the Parthenon gradually emerged as a pilgrimage site between the seventh and tenth centuries. The sources are very problematic and Kaldellis struggles to squeeze reliable information from them regarding pilgrims and patterns of pilgrimage traffic to Athens. His results, albeit impressionistic, are convincing but one is left with even more questions. There is no evidence whatsoever about the Athenian profile of the Theotokos and the new landscape of sacredness in which she and the pagan relic of the Parthenon came to dominate. One wonders, for example, about the symbiotic relationship of the Parthenon/church with the good number of Christian establishments on top of or around the rock of the Acropolis (e.g. the Asklepieion, interestingly enough dedicated to the healing Saints Kosmas and Damianos) and surrounding areas. Despite Kaldellis' effort to stress the Parthenon/church's singularity as a focus of pilgrimage, the Leonides basilica and adjacent martyrion near the Ilissos river must have been equally important and attractive sites; one suspects that the Parthenon/church existed in a socially complicated and perhaps multilayered network of movement toward sacred sites. Kaldellis is in more secure ground, nevertheless, when he turns to the extraordinary corpus of the Christian inscriptions on the Parthenon. Numerous prayers, epitaphs of prominent ecclesiastics, and names of laymen started being inscribed on the monument ca. 600, thus attesting to (but also shaping) the building's centrality in Athenian cultic life for several centuries. It may well be, Kaldellis hypothesizes, that "the insistence of the Parthenon inscriptions on personal names has more in common with ancient habits than with those of Christians in late antiquity" . No matter how we interpret this epigraphic habit, it rendered the Parthenon an unparalleled repository of memory and entreaty. The life of the Parthenon/church emerges in much sharper relief from ca 1100 onward. Kaldellis makes good use of an ecclesiastical register of properties (πράκτικον) in order to reconstruct the topography of the city at the beginning of the twelfth century. This was a period of prosperity for Athens, one which witnessed the establishment of a good number of churches--the humbly sumptuous and elegant specimens of an Athenian school of architecture that seem to have rivaled in subtle, yet distinct, ways the grandiose creations of Constantinople. Kaldellis bypasses these important monuments, and this is rather awkward because they still set the backdrop of normalcy against which the Parthenon enjoyed its unique and formidable status as home to the Theotokos (now crystallized as "Athenaïs" or "Atheniotissa"), her cathedral, and a pilgrimage center of universal fame and appeal. Constantinople also was the spiritual home of many pious ecclesiastic leaders who arrived in Athens armed with metropolitan snobbery and a very sophisticated apparatus of classical scholarship, only to find the harsh reality of ruins and a glory long gone. Some of them found solace in experiencing the Parthenon/church as a material affirmation of Christian triumph while others, e.g. the wise but tragically misplaced Metropolitan Michael Choniates or Akominatos, escaped to the irresistible magnetism of its classical aura and finesse. It is this idiosyncratic character of the building, Kaldellis argues, that accounts for the exceptionality of the Atheniotissa, her popularity and attractiveness, her fame and universal appeal. The ancient building was "...not merely the flagship of the Theotokos cult but the very reason for its existence" (144). He sees the very materiality of the Parthenon as the indispensable, yet at the same time unattestable, precondition for the success and pervasiveness of the cult of the Atheniotissa. The argument is convincing despite the reticence of the relevant sources as to what precisely the medieval worshipers appreciated on the Parthenon. Kaldellis leaves no stone unturned to reconstruct the building's exterior and interior ambiance at a time when ecclesiastical buildings came to encapsulate the Christian universe in both their form and decoration. To what extent and how could this superb relic fit in the established theological symbolism of Eastern Roman empires' world order?
It was in this period that a new apse was constructed and along with it a mosaic of the Theotokos (Kaldellis emphasizes that the process involved the careful dismantling of the frieze block with "peplos scene"). This new feature punctuated what must have been a truly bizarre interior. More importantly, the twelfth century witnessed the association of a frequently attested, yet frustratingly elusive, miraculous and ever-burning light with a "photocentric" conception of the Theotokos Atheniotissa--a well conceived attempt to enhance the cathedral's mystical aura. Interestingly enough Kaldellis hypothesizes that this may have been inspired by the ever-burning lamp by Kallimachos at the Erechtheion. This is possible in a climate of intense preoccupation and latent dialogues of both Athenians and outsiders with the classical past of Athens. On the other hand, one can not help thinking that this preoccupation with light is curiously concurrent with the important spiritual underpinnings of Abbot Suger of Saint-Denis (falsely identified with Dionysius the Areopagite in the Mediaeval period) regarding light and its transcendental qualities. Could this be pure coincidence only?
Kaldellis' fascinating story of the Christian Parthenon ends grimly in 1204. The subsequent history of the Parthenon and Athens paints a very black canvas and largely accounts for the irretrievable loss of evidence regarding the period covered in this book. It is only to be hoped that others will follow Kaldellis' lead to unravel the life of the monument as a Latin Cathedral and later on as an impressive mosque. Kaldellis has done a superb job illuminating the vitality and complexity of attitudes toward the Parthenon in the Middle Ages. The book should be read carefully not only by Medievalists but also by Classical scholars who can no longer claim to be the primal stake holders in the preservation and study of the Parthenon phenomenon.
Anthony Kaldellis, The Christian Parthenon: Classicism and Pilgrimage in Byzantine Athens. Cambridge/New York: Cambridge University Press, 2009. Pp. xiv, 252; ills. 26 b/w, 2 maps. ISBN 978-0-521-88228-6. $99.00.
Posted by John at 4:31 PM