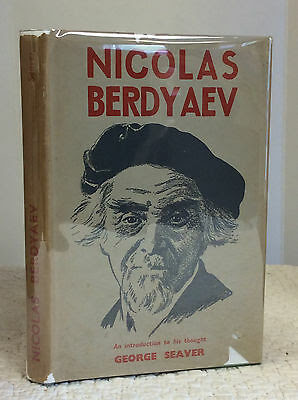 By George Seaver
Reviewed by Georges Florovsky
The Journal of Religion, Vol. 31, No. 2 (Apr., 1951), p. 152.
Mr. Seaver's enthusiasm for Berdyaev admirably qualified him for the task of interpreter. His presentation is vigorous and concise. He added but few comments of his own. Criticism did not belong to the scope of his work, nor had he probably much to say against Berdyaev, except on some minor points. "It was the mission of Berdyaev to rescue the religious consciousness of Christendom from this alienation of spirit from Spirit, by establishing the faith on the rock of personal experience and not on the sands of dogma" (p. 14). And this "mission" is traced back to the tradition of the Eastern church of Europe.
Of course, Berdyaev should be interpreted against his immediate Russian background, and Dostoevski's influence on his development was very great. Yet it is hardly possible to contend that Jacob Bohme was "not essential to his philosophy" (p. 12). In fact, the main ideas of Berdyaev can be traced back precisely to Bohme, and, in his book on Dostoevski, Berdyaev interpreted him in the categories of Bohme. It is a question not only of influence but rather of an intimate spiritual kinship.
There is little new and original in what Berdyaev says against the "official theology." It is exactly what had been already said by various mystical writers since the Reformation, especially in the seventeenth century, and Bohme was not the only spokesman of this trend. Berdyaev's appeal to an "existential" experience is precisely the seventeenth century's appeal to the "Inner Light." It is in this historical perspective that the message of Berdyaev should be interpreted and assessed.
On the other hand, Berdyaev was definitely a "rationalist." He is reasoning throughout all his books. They are but one lengthy argument, usually polemically sharpened. There is much more "dialectics" in his writings than true "experience." Again, sometimes "personal experience" is just a complementary euphemism for "imagination." In fact, the real tension is not so much between "personal experience" and "arid speculation" as between gnosticism and biblical Christianity. It is questionable whether "the revelation of Christ must precede our knowledge of the Jesus of History" (p. 57). It is Seaver who says so, but it is also Berdyaev's contention. It is precisely in this perspective that one should study Berdyaev and then decide where is the true Rock and where the shifting sands. If Berdyaev is to be trusted on the strength of his appeal to "experience," why should we deny experience to Karl Barth?
Posted by John at 4:11 PM