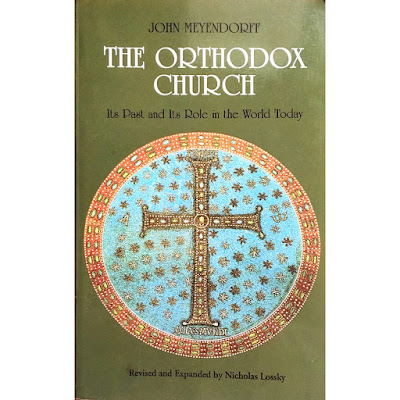 (1) The relationship of State and Church in Byzantium has been for centuries a controversial topic between the East and West, and even now the average Westerner is usually suspicious at this very point: Was not the Church in the East radically subjugated to the State, resp. to the Emperor, and later to the Tsars of Russia? What Father Meyendorff says in his Chapter II is perfectly correct, but it would hardly have satisfied an average Westerner, who might have been prejudiced on the matter. At least a quotation from Justinian's famous Novella 6, with a proper commentary, should have been given in this context, and something should have been said about the indivisible character of the Byzantine Commonwealth, which was at once a State and a Church, so that actually there was no problem of relationship between "two Societies," but rather that of relationship between two offices or ministries in the One Society. In fact, this was the most distinctive feature of the whole Medieval system, both in the East and in the West. The reader might be directed at this point to the admirable book of Sir Ernest Barker, now available in the paperback edition (Church, State and Education, Ann Arbor, University of Michigan Press, 1957).

(2) In the same chapter more should have been said on the character and authority of the Ecumenical Councils (actually, Father Meyendorff himself has said more on another occasion), because the concept of the Council is considerably different in the West and in the East.

(3) The sketch of Russian Church History in Chapter VI, only fifteen odd pages, is on the whole well done. But, obviously, more had to be said on the modern period, since Peter the Great, and his omi-nous "Ecclesiastical Reform" should have been described and evaluated in full: in fact, it is but vaguely mentioned! But it is precisely the matter in which the average reader may be interested. What was the real position of the Russian Church under "the Tsarist regime"? Was it really no more than a department of the State, with the Tsar as its head? Was the Church - people and clergy - satisfied with this factual and "legal" situation? Nothing at all is said by Father Meyendorff about the tension between the State and Church, and the search for new forms for their relationship, culminating in the Council of 1917.
It is a pity that the author dealt with "Doctrine and Spirituality" in a summary and sketchy way (pp. 190-207). It is true that, as the author contends, it is difficult to include a systematic exposition of doctrine in a small book. But it was indispensable to focus the attention of the reader on the distinctive tenets of the Orthodox tradition. And this has not been adequately done. It is also true that certain doctrinal points are made in the course of the historical narrative. The reader, however, may find difficulty in focusing his attention on the essentials and in tracing all scattered points to the one crucial vision. In particular, the doctrine of Redemption, in which the distinctive ethos of Orthodox tradition is manifested in the most spectacular way, is most inadequately dealt with by Father Meyendorff; actually there is but one page, 197-198, and not on Redemption, but only on the concept of the Original Sin, and it may prove to be hard reading for a Westerner. However, what is said in the same chapter on Orthodox spirituality is fine and inspiring.
On the whole, the book is a good and useful essay, and will serve its purpose, provided the reader goes on in his reading and study.
Posted by John at 4:28 PM