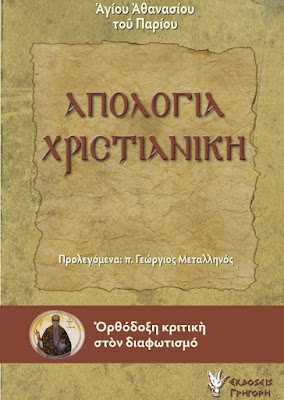 Ἀπολογία Χριστιανική (Christian Apology)
Published by Γρηγόρη, Athens, 2015, 312 pages.
By Saint Athanasios Parios
Reviewed by John Sanidopoulos
First published in 1798, the Christian Apology of St. Athanasios Parios (+ 1813) is published with this translation for the first time in Modern Greek (which will hopefully be soon translated into English), with a helpful Introduction by the late Protopresbyter Fr. George Metallinos.
St. Athanasios was one of the leaders of the Kollyvades Movement, which originated on Mount Athos in the 18th century as an effort to restore traditional Orthodox practices and opposed unwarranted innovations. His books are mostly a patristic approach written to answer specific needs and challenges of his time, for the benefit and education of the Orthodox flock.
His work Christian Apology is primarily an Orthodox philokalic response to and critique of the European Enlightenment. This book is perhaps the most significant Orthodox response to Western thought since the time of St. Gregory Palamas in the 14th century. The European Enlightenment was creeping into Greece via Greek followers of this Enlightenment, and it demanded a response, since it denounced everything that Orthodox Christianity stood for. Europe - especially France - had begun to distance itself from every form of Christianity during the French Revolution in 1789, replacing it with a "religion of reason", namely atheism. St. Athanasios argues that French atheism has its source in the absence of divine fear and a "total amnesia of God". As a consequence it led to internal perversions which forced them to make false declarations about the natural world, which they claimed to worship.
It is within this context that St. Athansios views the French declarations of Freedom and Equality. These Christian concepts were behind the ideology of the French Revolution, but they did not consider the fact that false freedom makes one a slave of one's desires, and false equality is an empty promise. St. Athanasios Parios fought fiercely against the ideology of the European Enlightenment, for this reason, and became the target of the leaders of the pro-Western current in Greece, especially Adamantios Korais.
St. Athanasios writes at one point:
"How can two people be called equal when one is very rich and the other is starving and forced to steal because of his poverty? These declarations are an invention of cunning and insidious people, who, wanting to satisfy their passions and fulfill their evil desires, instilled in the minds of the common people this unbridled wind of equality, to help them achieve their purpose. Can there ever be equality in societies dominated by greed, dominated by passions, where no other expression is heard more often than 'mine' and 'yours'?"
He goes on to say:
"Equality, yes, did exist once! But where? In the newly formed Church of those good Christians, the simple and pious! There, as Saint Luke describes it (Acts 4:32), no one had anything of their own, but it was all common - money, clothes and food. But why was everything common? Because, he says, the hearts and souls of the faithful were one! Everyone had an opinion and a will about God and they were all connected with brotherly love, so close that, although they were a lot of people and of different ages, men and women, old and young, they were all so unified that they looked like one body that was moved by one soul.
The same equality and solidarity has existed for many centuries in the coenobiums of the Venerable ones of old, Pachomios, Savvas, Euthymios, Theodosios and many others, because in them brotherly love and solidarity were preserved. That, indeed, was true Equality!
But the equality the new democrats are showing is false, it is naked, as is their freedom. They have been invented by cunning people to carry out their plans with the power of the people. And of course, this double declaration of freedom and equality, as a whole, gained great prestige among the anonymous crowd, not only within the borders of France, but also in the campaigns against Italy, where, although they were campaigning for a war against the armies of its cities, they were welcomed everywhere with open arms, not as enemies, but as friends and brothers and saviors. At some point, however, they realized the fraud, perhaps because they saw that in many other places where the preachers of equality were trampled, 'grass did not sprout again,' as it is commonly said."
The Christian Apology of St. Athanasios Parios is the culmination of the apologetic work by one of the pioneers of the Philokalic renaissance of the 18th century, and is as timely now as it ever was. It is the Orthodox answer to the challenge of Europe. It is a well-documented response to the positions of the European enlighteners, who attempted to deconstruct the Christian Faith and Tradition, behind the falsified and misleading slogans of Equality and Freedom.
Posted by John at 2:21 PM