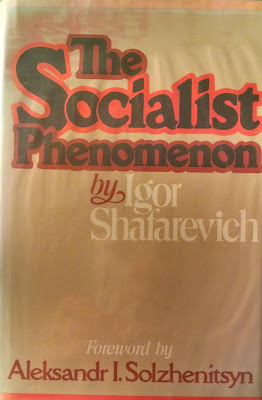 I recently read it, and though the copy I have, translated in 1980, is a difficult to read small cheap printing, it is most valuable in content that treats a complex subject with a broad overview. Shafarevich was a friend of the late Nobel Prize winning novelist Alexander Solzhenitsyn (who provides a Foreword to this book) and served as an important critic of the Soviet regime and of future liberal proposals for the development of Russia. It completely dispelled the common myth that socialism or collectivism was created in the timeframe of the 18th century French Revolution or by Karl Marx. He traces the origins of socialism back to Plato, through the Middle Ages and up to Marx. Shafarevich identifies the points all socialist societies have: Destruction of private property rights, of the family, and of organized religion, particularly Christianity. Socialism has nothing to do with achieving economic parity and happiness through equitable distribution of materials and wealth. It was always a system of domination and control over the "masses". By his experience and studies, Shafarevich looks at collectivist philosophy coldly and without sentiment towards it. In fact it is evident that he found little if anything at all redeeming in the collectivist model.

The ancient Chinese, Incas, Greeks and all other so-called socialist civilizations were more similar than different in their basic philosophical underpinnings; and stand in sharp contrast to the individualism of the recent West. He demonstrates what a rare and precarious thing that individualism has been throughout history; and the spectacular loss it would be to let modern romanticists, dreamers, and lazy ignorant conformists drag the human race back into the misery and mediocrity that is collectivism...regardless of the form it takes.

Shafarevich writes from the perspective of a Russian Orthodox Christian and a Russian nationalist and as such provides a unique understanding in this light. The book provides a fascinating study on the history of socialism and an examination of the problems within socialist doctrines as held by Marxists. As such, this book remains an important and courageous book showing the errors that lie within the socialist impulse (which Shafarevich ultimately finds to be rooted within the death instinct) and unveils the Soviet state for the monstrosity it was. It is also just as relevant today as it was in the 20th century.