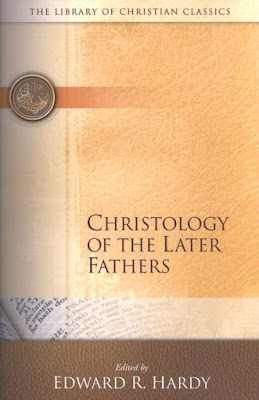 Christology of the Later Fathers
Volume 3 of Library of Christian Classics
Edited by Edward Rochie Hardy
Westminster John Knox Press, 1954
400 pages
Reviewed by Georges Florovsky
Interpretation: A Journal of Bible and Theology
Volume 9 (2): 1 – Apr 1, 1955
The new volume of the Library of Christian Classics will be warmly welcome especially by Seminary teachers. It will be used as a handy source book in the class on the history of Christian doctrine. Most of the documents included in the volume were already available in English translations, but the huge volumes of the renowned collection - recently reprinted - The Nicene and Post-Nicene Fathers - were not easy to be handled by the students. Now, in the volume under review, we have a good selection of the most important texts, to which the editor supplied an admirable and helpful introduction.
Read more »
Posted by John at 1:27 PM

15 - Book Review: "For the Sake of the World: The Spirit of Buddhist and Christian Monasticism" by Patrick G. Henry and Donald K. Swearer 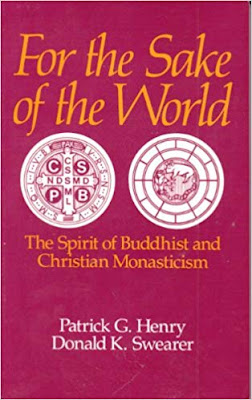 For the Sake of the World: The Spirit of Buddhist and Christian Monasticism
By Patrick G. Henry and Donald K. Swearer
Reviewed by John S. Romanides
The authors of this valuable and interesting book understand "contemplation" and an "urge for transcendence" to be a basic similarity between Buddhist and Christian monasticism. This is true for Augustinian neo-Platonism, which is the position adopted by this book as normative for the Christian monastic tradition.
However, the Augustinian synthesis between neo-Platonism and the Bible was never accepted in the East, and was rejected in the West by both Celtic and Gallo-Roman monasticism. It did not, finally, take hold in Merovingian Gaul; this is why St. Gregory of Tours, an admirer of Sts. Basil and John Cassian, never mentions Augustine. That is to say, such Gallo-Romans as Sts. Martin of Tours, Aridius, Patroclos, and the Lombard Stylite Vulfailac belong to the same biblical tradition as the fathers in the East. In 529 Emperor Justinian closed the Platonic school of Athens, and when Augustine's writings became known in the East he was dropped from the list of "fathers of the church," as these were understood there.
Read more »
Posted by John at 5:01 PM