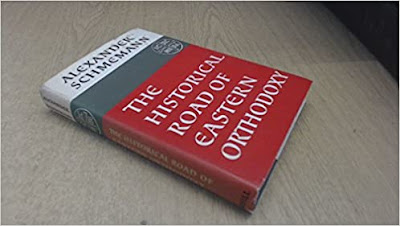 Dr. Onasch is a competent scholar in his own right. In his new book he asserts that he is concerned primarily with the "study of facts" (Tatsachenforschung). He strongly insists, too, on the priority of the historical approach. In fact, however, he offers a rather polemical treatise. He keeps his watchful eye steadily on that "idealized" picture of Eastern Orthodoxy which has been popularized in various modern books on the subject, even in those written by scholars who stand outside the Eastern tradition. Eastern Orthodoxy has been often presented by such writers as a "third power" in Christendom, as a "Johannine" version or stream of Christianity. Dr. Onasch sharply dismisses such presentations as a myth. For him Eastern Orthodoxy is rather a fluid and changing phenomenon, of an almost protean character. The "unity" of Eastern Orthodoxy is for him but a dangerous fiction. This is his starting point, his fundamental assumption. It is precisely this initial postulate that prevents him from discovering that "unity in variety" which many other scholars, past and present, have been able to perceive. The reader does not find much in his book on the inner development of the Orthodox doctrine. He is given the impression that the Orthodox simply deny any development and are not aware of historical "changes." The section on Orthodox theology is disappointingly brief. There are some valid observations. But the point of the author is that Orthodox theology is different from that of the West, and the reader is expected to assume that for this reason it is wrong. The treatment at this point is more polemical than analytical. Dr. Onasch simply ignores the Orthodox theology of the nineteenth century, except for casual references to some modem trends of contemporary Russian religious philosophy which he summarily suspects of "liberalism." Moreover, he does not distinguish carefully enough between "doctrine" and "theology," between the authoritative teaching of the Church and the interpretative opinions of theologians. Strangely enough, he has nothing to say on the Orthodox attitude to the Scriptures. In this section of his book there is little "study of facts," but rather a personal interpretation. The section on the rites and worship seems to be disproportionately long - one third of the book - and is overloaded with detail. There is no attempt to grasp the "ethos" of Eastern spirituality or devotion. What is really disturbing in the book is the wrong description of the contemporary position of the Orthodox churches. It is strange to find the Armenian Patriarchate listed under the heading of the Patriarchate of Constantinople, along with the churches of Greece and Cyprus, and the Monastic Republic of Mount Athos (pages 61-62). Dr. Onasch must know that the Armenian Church is a Monophysite church and not in communion with any "Byzantine" churches. Nor is it fair to put the autocephalous churches of Greece and Cyprus under the heading of the church of Constantinople. Nor is what is said of the Russian Emigrantenkirchen on page 68 correct. The bibliography appended to the volume is incomplete; important titles are missing, even those in German.

The book by Mr. Demetrakopoulos has the subtitle A Summary of the Beliefs, Practices, and History of the Eastern Orthodox Church. Now, "summary" and "dictionary" are obviously quite different things. In fact, there is no "summary" of any kind in the book, and in any case there is no "history." It is a "dictionary," in form and in method. The value of a dictionary depends upon the judicious and comprehensive selection of words and items and the accuracy of definitions. In both respects the book of Mr. Demetrakopoulos is sadly deficient. Many important theological terms are missing: there is a brief description of the "Hypostatic Union" (page 106), but the term "hypostasis" is not included, nor is any explanation given of the related terms "nature" and "substance" (ousia). The term "homoousios" is missing. Certain definitions are inaccurate and misleading. Is it correct to say that "the Holy Spirit is the modern name of the Holy Ghost" (page 101)? The definition of "councils" is confused (pages 62-63; cf. page 171). Was it necessary to include in a "dictionary of Orthodox theology" such items as "homosexualism," "hypnotism," "masturbation," and the like? For these words, and for many others, it is enough to turn to current, and more reliable, dictionaries of general character. One may add that many terms of Orthodox theology and practice are well explained or defined in Webster Unabridged.

There is an odd disproportion in the structure of the book by Dr. Schmemann. Of 343 pages no more than about thirty are on the "modern" period. For that period the presentation is sketchy, fragmentary, rather casual. It seems that a great river has been suddenly lost in the sands, and the "road" too has been lost. The reader may even think that Orthodoxy belongs actually to the past, to the remote past, and now but a shadow remains. This is precisely what an average reader in the West thinks of Eastern Orthodoxy. He needs first of all competent guidance for the modern period. The first part of the book is, on the whole, fair, although not without occasional inaccuracies and exaggerations. It is in no sense original. The English reader has ample resources in his own language to promote his knowledge of the ancient church and even of Byzantium. The new book does not add much to what was already available. What is needed in English is a good history of the Orthodox churches in the last centuries. The title of the book under review is in any case misleading. Indeed, the period of glory has been succeeded in the destiny of the Eastern Orthodox churches by a period of gloom and trial, but this period has had its own problems which are also the problems of today. The book of Dr. Schmemann first appeared in Russian in 1954. The author had enough time to discover his failures and to cope with them.